Chad has a population of roughly 15 million people and comprises many different ethnic and tribal groups.  The average age of the population in Chad is 16 years old and more than 65% of the population is under age 25(3).
French and Arabic are the official languages.
Chad’s distribution of religious affiliations is approximately 50% Muslim and 50% Christian (combined Catholic & Protestant)(3).

Chad is a landlocked country in North-Central Africa.  The region is host to many countries with unstable political climates causing significant unrest in the region.  Chad is bordered by Libya to the north, Sudan to the east, the Central African Republic to the south, Cameroon and Nigeria to the southwest, and Niger to the west. It is the fifth largest country in Africa.
Chad’s climate and terrain consists of dry, hot Saharan desert in north, mountains in northwest, arid plains in center with minimal yearly rain, and tropical lowlands in south.  Overall, the majority of Chad is a dry, hot climate. 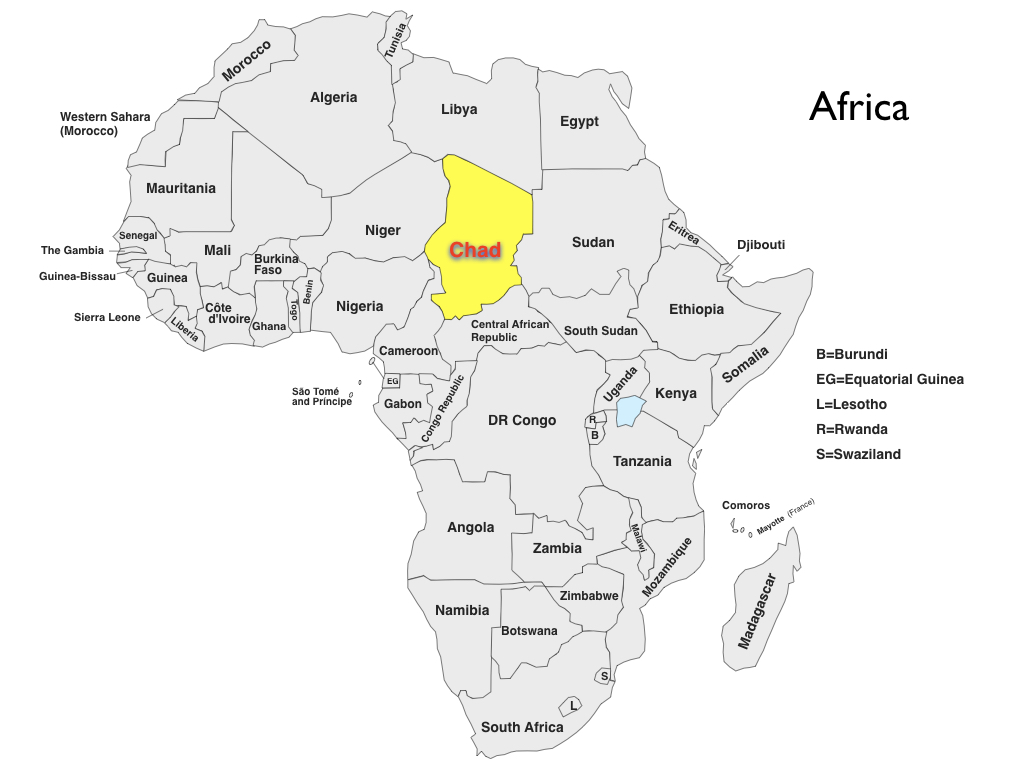 Chad’s government is democratic with an elected president; however, according to Transparency International it is also one of the most corrupt governments globally(5)
Chad is ranked as one of the poorest countries in the world, scoring 186 out of 189 countries listed on the Human Development Index which measures several standards of development for living including health, education, and economy.1  According to the International Monetary Fund, the 2018 annual GDP per person was $811 which equates to approximately $2.22 per day of income(6).  Nearly 47% of the population lives below World Bank poverty guidelines of $1.90 per day(5).  Approximately 80% of persons are employed in agriculture and 20% in industry.  Oil and agriculture provide the majority of the country’s GDP(3).
Given Chad’s challenging economic situation, infrastructure is poor.  The majority of the country is connected by unpaved roads, many of which become impassable during the rainy season.  There are 2 major rivers in Chad, Chari and Legone, which are navigable only during the rainy season. There are 59 airports in Chad, 50 of which do not have paved runways.  This makes them difficult to use during the rainy season due to inability to traverse mud. The challenges of poor infrastructure combined with the fact that Chad is a landlocked country results in high transportation costs for imported goods and dependence on neighboring countries(3).
Chad also remains one of the least developed on the African continent with regard to telecom infrastructure including fixed telephone, mobile telephone, internet and electricity.

The Chadian government Education Ministry oversees education including curriculum in Chad.  The subjects provided by the government include Language (French & Arabic), geography, and history.  Limited mathematics is taught. There is no science curriculum. The Chadian government in the last few years has taken over education in refugee camps as part of the overall Chadian Education Ministry.  In spite of this, education is still delivered through Jesuit Refugee Service in the refugee camps; however, curriculum is approved only for the subjects previously listed(6).
In Chad, females on average complete 1.2 years of school while boys complete 3.4 years of school.  22% of the population is literate. Approximately 88% of he population enrolls in primary school but nearly 50% drop out before completion.  Only 23% of the population ever enroll in secondary school(1).  The largest reason for the lack of education completion is the need for children to work.  40% of children under the age of 15 are employed, many in agriculture. Over 70% of children over age 15 are employed(1).

Chad faces many health challenges due to infrastructure challenges in Chad, including poor governance, a weak and under-resourced health system, and extreme poverty and food insecurity.  There is a high prevalence of endemic and epidemic diseases, primarily malaria, tuberculosis, acute respiratory infections, HIV/AIDS and diarrheal diseases(4).
Chad continues to face ongoing food insecurities contributing to chronic moderate to severe malnutrition in 56% of children under age 5(4).  Additionally, the majority of the population suffers from micronutrient deficiency resulting in many vitamin insufficiencies, iron deficiency anemia, and iodine deficiency.
Only 50% of the country has access to improved drinking water sources and 12% have access to improved sanitation(4).
Life expectancy at birth is 53.2 years(1).
7.5% of infants die at birth and 12.7% die before age 5(1).
There are only 3.7 physicians and 2.1 nurses per 100,000 population.  65% of these are concentrated in the capital of N’Djamena resulting in little to no health care access for the majority of the population(2).